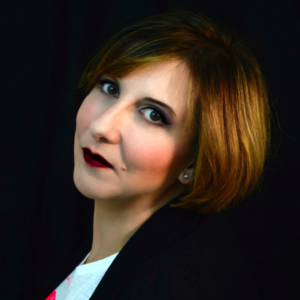 Born in Lucca, Italy, she studied with the singer Gianpiero Mastromei and Giovanna Canetti. She is a winner of several singing competitions in Europe and of the “Luciano Pavarotti Competition” in 1995 in Philadelphia. In 1997 Riccardo Muti accepted her for the Opera Studio of La Scala in Milan and also appointed her for the role of Donna Anna in Mozart’s DON GIOVANNI, a role that brought her great success.

Her wide repertoire includes roles from Mozart up to Puccini. She had great success with Mozart roles like Donna Anna & Donna Elvira/DON GIOVANNI, Elettra/IDOMENEO, Fiordiligi/COSI FAN TUTTE or as Contessa/LE NOZZE DI FIGARO, but also in the belcanto repertoire as MARIA STUARDA, Adalgisa/NORMA, ANNA BOLENA or Madama Cortese/IL VIAGGIO A REIMS. She already performed most of the great Verdi and Puccini heroines from Verdi’s LUISA MILLER, Amelia/SIMON BOCCANEGRA, Alice/FALSTAFF, Desdemona/OTELLO, Leonora/IL TROVATORE, Elisabetta/DON CARLO up to Puccini’s MANON LESCAUT, MADAMA BUTTERFLY, Mimi/LA BOHEME and Liu/TURANDOT. In addition to the great Italian repertoire she also sang French roles like Micaela/CARMEN or Antonia in LES CONTES D’HOFFMANN.

Her international career already brought her to the great opera houses of the world and she regularly performs at some of the most prestigious houses. She is a regular guest at the Opera di Roma, the Bayerische Staatsoper Munich, the Teatro alla Scala Milano, the opera house in Zurich, the Teatro La Fenice, the New National Theatre Tokyo, the Semperoper Dresden, the Teatro Regio Torino, the Theatre Geneve, the Maggio Musicali Fiorentino, the Suntory Hall Tokyo and the Staatsoper Stuttgart. She has also sung at the Opera de Lille, the Teatro San Carlo di Napoli, the Santa Fe Opera Festival, the Lyric Opera Chicago, the Canadian Opera Company in Toronto, the Glyndebourne Festival, the San Francisco Opera, the Opera Frankfurt, in Essen, in Israel and many other places all around the globe.