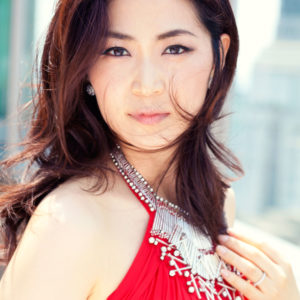 Soprano Haeran Hong, named the International Queen Elizabeth Grand Prize winner, has been noted as “charming of form, manner, and voice.” In her young, yet fast-paced career, she has performed various leading roles including Adina in L’elisir d’amore, Gilda in Rigoletto, and Pamina in Die Zauberflöte. This season, Ms. Hong will perform the title role of Lucia di Lammermoor with Florida Grand Opera, the title role in Verdi’s Giovanna d’Arco with Odyssey Opera, and will return to The Metropolitan Opera as Flower Maiden in Parsifal.

In recent seasons, Ms. Hong sang the title role of Händel’s Semele with Pacific Musicworks in Seattle, made her début in the title role in Donizetti’s Lucia di Lammermoor at Opera in Williamsburg, sang Susanna in Le nozze di Figaro at Princeton Festival, and returned to The Met to cover the roles of Olympia in Les contes d’Hoffman, Nannetta in Falstaff, and Sophie in Werther, as well as their productions of Die Frau ohne Schatten, Dialogues des carmélites, and Un ballo in maschera. Ms. Hong initially joined the Metropolitan Opera roster as Crowned Child in Macbeth and returned shortly thereafter in Robert Lepage’s production of Siegfried and to sing Flower Maiden in Parsifal.

With Juilliard Opera, she performed the title role of L’incoronazione di Poppea, Sister Constance in Dialogues des carmélites, Dalinda in Händel’s Ariodante, and Susanna in Le nozze di Figaro. She also sang the role of Barbarina in Le nozze di Figaro and covered the role of Seleuce in Händel’s Tolomeo, re d’Egitto as a member of Glimmerglass Opera’s Young American Artists program.

Favorite concert engagements include Händel’s Messiah with the Milwaukee Symphony Orchestra; a concert of Händel music with Maestro Harry Bicket and the Hong Kong Philharmonic; Bach’s Wass Gott tut, das ist wohlgetan and Brahms’ Neue Liebeslieder Waltzes with the La Jolla Summer Fest; Villa Lobos’ Bachianas Brasileiras No. 5 with the Aspen Music Festival; a concert with the Vienna Strauss Festival Orchestra in Korea; a gala concert at the Bolshoi Theatre in Moscow; plus Rutter’s Mass of the Children and excerpts from Messiah at Carnegie Hall.

Recent international engagements include her début with the International Festival Echternach in Luxembourg, where she performed with the Orchestre Phiharmonique du Luxembourg. She was invited to sing for Queen Paola Foundation’s Annual Christmas Concert in Belgium, returned to Korea for a concert in Seoul with Prime Philharmonic Orchestra and for a production of L’elisir d’amore as Adina with Seoul Metropolitan Opera, and also traveled to Brazil for a series of recitals in such venues as Teatro Municipal do Rio de Janeiro and Teatro Cultura Artística in São Paulo.

Ms. Hong was named a Finalist in Plácido Domingo’s Operalia, the World Opera Competition, as well as a National Finalist for the Metropolitan Opera National Council Auditions. She holds a Bachelor of Music degree from Korean National University of Arts, as well as a Master of Music Degree and Artistic Diploma in Opera Studies from The Juilliard School.