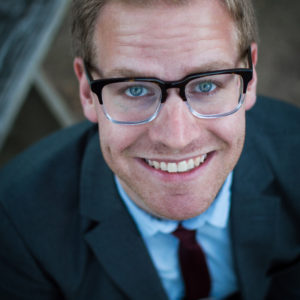 Praised for his “masterful acting” and “fine singing,” Ethan DePuy made his Chautauqua Opera debut as Dr. Caius in Falstaff. As a Young Artist with Ash Lawn Opera, he performed the roles of Motel in Fiddler on the Roof, Gherardo in Gianni Schicchi, Elder Gleaton in Susannah, and Salesman #1 in The Music Man. Other recent appearances include Nemorino in L’elisir d’amore, Basilio in Le nozze di Figaro, Jacey Squires in The Music Man, Alfred in Die Fledermaus, the title role in Albert Herring, Peter Quint in The Turn of the Screw, Chevalier de la Force in Dialogues of the Carmelites, and the Snake in The Little Prince. On the concert stage, he has performed Mozart’s Requiem, Solemn Vespers, and Coronation Mass, Bach’s Mass in B minor, Stravinsky’s Mass, Schubert’s Mass in G, and recently made his solo debut with the Back Bay Chorale in The Romantic Generation. At Boston University’s Marsh Chapel, he has performed as tenor soloist in Bach Cantatas BWV 190, BWV 1, and BWV 66, Howells’s Requiem, Rachmaninoff’s All Night Vigil, and Buxtehude’s Membra Jesu Nostri. The Rochester, NY native is a recipient of the 2013 Young Artist Encouragement Award from the Chautauqua Opera Guild. An accomplished choral artist, he joined the staff of Music at Marsh Chapel and the ensemble of Boston’s Handel and Haydn Society in 2014.