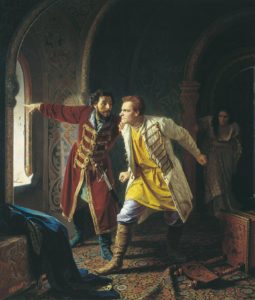 So with the support of Poland and various and sundry enemies of Godunov, False Dimitrij I actually pulls off a coup and gets rid of Godunov’s son and widow.  He spares the daughter, Xenie, who becomes his concubine, and marries a Polish noble woman who refuses to convert to the Russian Orthodox Church. Why should she? He promised to make Russia a Catholic country.

This is all it takes for Prince Vasily Sujskij to take action against this imposter and he starts spreading rumors – about the Roman Catholic Church, the planned massacre of the people of Moscow, and lots of other salacious goodies. And he gets plenty of traction amongst the people and the military.

When the plotters take over the palace, Dimitrij jumps out a window, breaks his leg and is promptly shot.

So what about the opera? Stay tuned.