We are going to Rome – pack your toga!

For our upcoming festival, we journey back to the 18th century. Surprised? Frankly, I was. This is not a direction I imagined our company going in. Fortunately Gil has more imagination than I, because when I started listening to a recording of Gluck’s Ezio , I was hooked. The music is just incredible. Emotionally driving recitatives, stunning arias. And the story may read like a Roman history lesson, but drama abounds: returning military hero loves girl – ruling emperor loves same girl – assassination attempt on – DOH! Spoiler alert. 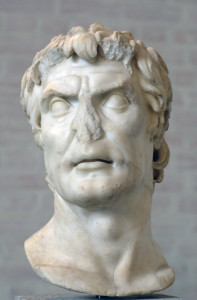 A bust of the real-life dictator Mozart based Lucio Silla on.

The Gluck is just one of the two operas we are staging this spring. The other is Mozart’s Lucio Silla , another little known if not quite as obscure opera. What do they have in common? Well, let’s see: exiled senator loves girl, ruling dictator loves same girl…hmmm…you get the idea.

The plots are the first clue that both of these works fall under the category of Opera Seria. From the source of all knowledge (Wikipedia, of course):

Opera seria (Italian pronunciation: [ˈɔːpera ˈsɛːrja]; plural: opere serie; usually called dramma per musica or melodramma serio) is an Italian musical term which refers to the noble and “serious” style of Italian opera that predominated in Europe from the 1710s to c. 1770.

And from NPR’s Tom Huizenga:
Typically, conflicts between lovers or authority figures (or both) would be resolved not by some mythological god swooping in at the last minute, but by a benevolent, morally upstanding ruler.

And true to form, all ends happily in both operas thanks to the rapid but heartfelt flip-flopping of dictators. What more could you ask for? Stay tuned for more on Opera Seria, Togas, hard to find scores/parts and all things Roman!