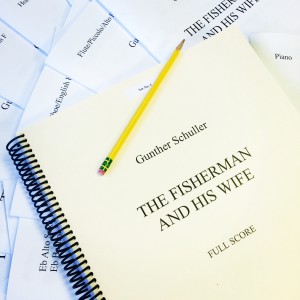 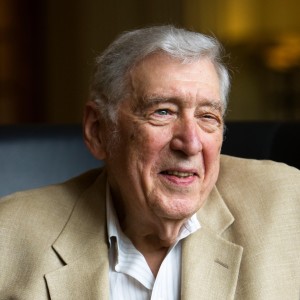 On Sunday, November 22nd at 3pm in Jordan Hall, Odyssey Opera and the Boston Modern Orchestra Project will be putting on a memorial concert for Pulitzer Prize-winning composer Gunther Schuller (1925-2015), a brilliant soul and one of the greatest musical minds of the 21st century.

Schuller was personally beloved by many in the local community for his unique vision. His fusion of jazz vernacular with the symphonic and operatic world created the revolutionary hybrid-style known as “Third Stream”. He produced masterful works in his lifetime with profound eclecticism, mixing jazz and classical to create music unlike anything else.

This concert will feature live performances of his rare, challenging pieces by musicians at the top of their field: beginning with his 2013 work Games, followed by his famous jazz piece Journey Into Jazz, and concluding with his family-friendly one-act opera The Fisherman and His Wife, which has not been performed since its premiere in 1970…

Based on the fairy tale by the Grimm Brothers, The Fisherman and His Wife is about a goodhearted fisherman whose greedy wife pushes him to ask for more and more favors from an enchanted fish he had thrown back into the sea. When the wife finally demands too much, the fish takes away all he has granted, and the couple returns to their simple home having learned a valuable lesson.

Written by Schuller in 1970 with libretto by John Updike, the work was commissioned by the Junior League of Boston as a gift to the children of Boston on their 60th anniversary. It premiered with the Opera Company of Boston at The Savoy (an old movie palace which subsequently became the Boston Opera House), conducted by Schuller himself and directed by Sarah Caldwell.

The original cast was Muriel Greenspon as “Ilsebill, The Wife”, David Lloyd as “The Fisherman”, Donald Gramm as “The Magic Fish”, and Louisa Budd as “The Cat”.

A film of the opera was produced by Group W Productions.  It aired on WBZ-TV in December of 1970.